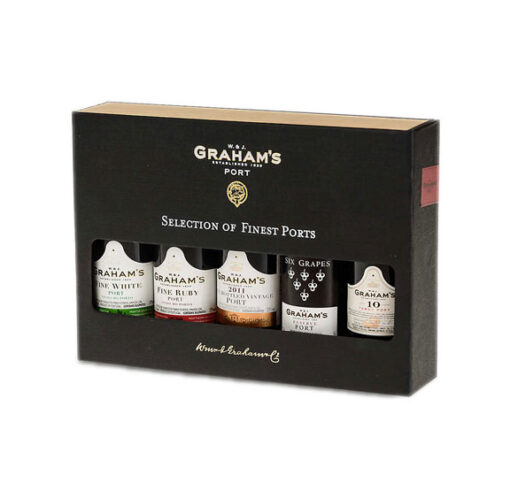 A limited number of white grape varieties are used in this Port’s production, foremost amongst which is Malvasia Fina, which gives this wine its attractive fruity and crisp flavour. Makes an excellent aperitif when served chilled or as a long drink with tonic water and a slice of lemon.

Ruby Ports are often described as “everyday” drinking Ports, but as you would expect from a producer with Graham’s reputation, you get that little bit more: full, fresh and fruity and in tastings often performs better than some lesser Reserve Rubies.

Produced only from using the finest quality grapes available in one single year, LBV Ports spend up to three times longer in wood hence the name late bottled vintage. This wood ageing is a perfect balance between complexity and elegance.

This is Graham’s oldest marque still in existence and quite possibly the best Reserve Port on the market. Such as its quality that winemaker, Charles Symington, says that it is one of the most difficult blends for him and his team to assemble in order that it consistently achieves the freshness and vigour similar to that of a young Vintage Port.

Aged in seasoned oak pipes (534 litre casks) for an average of ten years and blended to a consistent marque each time it’s bottled. Much lighter than Vintage Port, these wines are delicious when served slightly chilled and are sometimes drunk as an aperitif as well as after a meal.